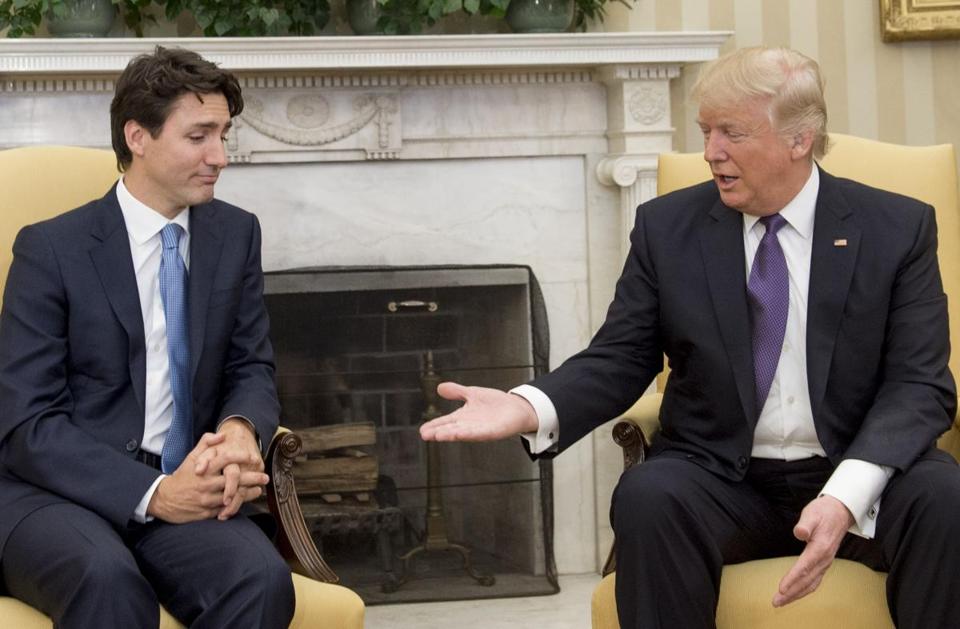 TO: The Right Honorable Justin Trudeau

RE: The Illegitimacy of the Trump Presidency

Those who pose the greatest threat to global stability and security are not radical Islamic extremists but the Israelis and pro-Israelis who produced the Trump presidency. I write to urge that you have me debriefed in order to protect Canada and the western alliance from those who put this narcissist in office.

I was born in 1952 as the out-of-wedlock son of Nelson Rockefeller. The circumstances of my birth were used to preemptively compromise my father’s prospects for the U.S. presidency. Two years after his death in January 1979, those complicit actively began to stalk me as I profiled them. [See the attached Introduction to The Hidden Tax on Humanity (also on www.hiddentaxonhumanity.com).]

Because those stalking me were also pre-staging or perpetrating large-scale geopolitical manipulations and massive financial frauds, I was routinely drawn into the “fields within fields…within fields” of relationships through which this trans-generational criminal syndicate has long operated in plain sight yet non-transparently and, to date, with legal impunity. Engage me in good faith and this transnational corruption can be made transparent, its key operatives held accountable at law and stability restored. For example:

Review the enclosed draft chapters for The Hidden Tax on Humanity, commencing with “The War in Iraq Could Have Been Prevented” and “The Indonesia Connection.” See my November 2015 submission to the U.K. Chilcot Inquiry and my June 2017 memo to four key generals in the Trump Administration. Tel Aviv’s war-induced alliance with Riyadh and the cultural fracturing of Europe was purposeful and geostrategic.

I am identified only as “John Doe” in the enclosed 2008 book (The Hidden Tax on Humanity—How Deception and Self-Deceit Took America to War) written with colleague Jeff Gates who will also participate in the briefing. This systemic corruption can be addressed provided you can deal functionally with confirmed facts proving that this ongoing duplicity traces to a common source and succeeds with the help of a complicit media, compromised lawmakers and a defrauded public thus far denied the facts and analyses you will find enclosed.

The back-stabber is not you but Israel, its lobby and those who put this classic asset in the White House to behave with the same self-absorbed sense of entitlement (aka Chosen-ness) shared by those I profiled for 36 years. After seven decades of non-stop duplicity, this false friendship induced the U.S. to behave like those who now wield virtual control over our Congress and, through Donald Trump, our presidency.

I look forward to hearing from you at your earliest convenience.

Summary of my 1997 Meeting with Fred & Charlene Gorbet

In May 1997, Gus German, my counsel Ron Burd and I were invited to dinner at the home of Fred and Charlene Gorbet. I had previously met Mrs. Gorbet at a healthcare conference. Mr. Gorbet, a former Deputy Minister of Finance (1988-92) was then serving as the Executive Director to the MacKay Task Force on the Future of the Canadian Financial Services Sector (1997-98). He had just returned from meetings in Washington with Alan Greenspan, Robert Rubin and Larry Summers who sought to persuade him to follow the same deregulatory path taken by those with oversight of the financial sector in the U.S.

I helped persuade him to resist that advice, enabling Canadian banks and credit unions to better insulate themselves from the pre-staging for what became in 2008 the subprime mortgage fraud that triggered the Great Recession, affecting economies worldwide.

Mr. Gorbet bristled when I pointed out the common identity of those urging that Mr. Gorbet take this deregulatory route. Citing his Jewish identity, he slammed his hand on the dinner table, reminded me that I was a guest in his home, and told me he was offended. His wife, son and daughter-in-law disagreed with him and persuaded him to apologize. His family told him to listen to the facts I was presenting. By the time our dinner concluded, Mr. Gorbet was taking notes that helped guide Canada’s course to resist that advice. Canadian banks were far less affected by the 2008 subprime fraud and emerged instead ranked among the world’s soundest banks.

As I was leaving, I explained to Mr. Gorbet that the same network of Jewish bankers who partnered with my Uncle David to orchestrate serial mega-frauds were manipulating his Jewish identity to his own detriment and the detriment of Canada. I reminded him that critical thinking demands never allowing bias or belief to cloud one’s judgment based on the facts. My Uncle David used the Rockefeller name (along with the credibility and trust associated with the name) to deflect criticism while his Jewish partners deflected criticism with the charge of anti-Semitism—just as Mr. Gorbet had when I confronted him with the shared identity of those who were then pre-staging what became the subprime mortgage fraud that cost the U.S. an estimated $58 trillion.

The role played by Mark Carney as a Governor of the Bank of Canada (2008-2013) is said to have played a major role in helping Canada avoid the worst impacts of the financial crisis that began in 2007. On his appointment to succeeded Sir Mervyn King as Governor of the Bank of England in July  2013, he became the first non-Briton appointed to the role since the Bank was established in 1694. In December 2016, Governor Carney warned of the societal risk of “staggering wealth inequalities.”