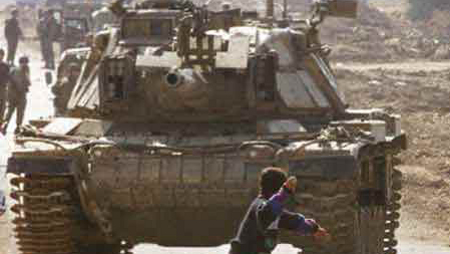 During the 1960 Christmas season, Americans flocked to the theaters to see Exodus, a 3-1/2 hour epic featuring romance, handsome freedom fighters and the triumph of Jewish destiny over Arab evil—all set against a Yuletide backdrop of Biblical prophecy as heroic Jews returned to their promised land.

Many moviegoers failed to realize that Exodus was not fact but fiction adapted from a 1958 Leon Uris novel, the biggest bestseller since Gone with the Wind. Directed by Otto Preminger and starring a young Paul Newman and Eva Marie Saint, the film featured Lee J. Cobb, Rat Pack member Peter Lawford and Italian crooner Sal Mineo, a teen heartthrob who received an Oscar nomination for his portrayal of a Jewish émigré. 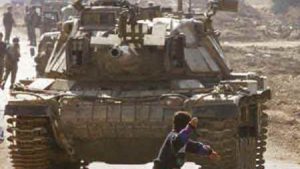 Then as now, Americans are easily swayed by sympathetic portrayals of an extremist enclave granted nation-state recognition by Harry Truman. A Christian-Zionist who had famously read the Bible cover-to-cover five times by age 15, Truman was a True Believer in the prophecy that the Messiah could not return until the Israelites returned to their ancestral home.

Truman White House counsel Clark Clifford routinely reminded the widely unpopular president that his 1948 campaign was woefully short of funding that the Jewish-American community—with that recognition—was eager to provide. In May 1948, General George C. Marshall, Truman’s Secretary of State, argued vigorously against recognition of this Zionist enclave as a legitimate sovereign nation. Truman heard similarly strong objections from the diplomatic corps, the fledgling Central Intelligence Agency and the Joint Chiefs of Staff whose analysis of the perils proved prophetic.

Marshall, the senior U.S. military officer in WWII, was outraged that Clifford, then in charge of Truman’s campaign, would put domestic political expedience ahead of U.S. foreign policy interests. Marshall assured Truman that he would vote against him if he granted the Zionists sovereign status. He also directed State Department personnel never again to speak to Clifford.

In March 1948, a Joint Chiefs paper titled “Force Requirements for Palestine” predicted that the “Zionist strategy will seek to involve [the U.S.] in a continuously widening and deepening series of operations intended to secure maximum Jewish objectives.” Those objectives included an expansionist agenda for Greater Israel that envisioned the taking of Arab land, ensuring armed clashes in which the U.S. was destined to become embroiled.

The Joint Chiefs listed the Zionist objectives as:

Akin to the fictional portrayal in Exodus, those Zionists lobbying Truman assured him they would remain within the initial boundaries. We now know that was a lie. They also promised that the Zionist state would not become what it soon became: a theocratic and racist enclave—albeit widely marketed as the “only democracy in the Middle East.” To remove all doubt as to the extremist nature of the Zionist project, the Joint Chiefs assessment added ominously:

“All stages of this program are equally sacred to the fanatical concepts of the Jewish leaders. The program is openly admitted by some leaders, and has been privately admitted to United States officials by responsible leaders of the presently dominant Jewish group–The Jewish Agency.”

Deceit from the Outset

A beguiling combination of manipulated beliefs and outright lies remain at the core of the U.S.-Israeli “special relationship.” The deceit deployed to advance the Zionist project remains obscured by a pro-Israeli bias in media and reinforced by pro-Israeli influence in popular culture.

The rewards are real for those who offer aid and comfort to this trans-generational duplicity. As Truman’s whistle-stop train traversed the nation, grateful Zionists refueled his campaign coffers with a reported $400,000 in cash ($3.5 million in current dollars). Those funds helped transform his widely anticipated loss into a clear victory with support from pro-Israeli editorial boards that—after recognition—boosted Truman’s sagging popularity.

Clark Clifford was rewarded with his career goal as a top-paid Washington lawyer. As a “made man,” he remained a reliable asset. During the G.H.W. Bush presidency, his prominence provided cover for a massive bank fraud involving the Bank of Credit and Commerce International. In 2009, Hollywood released an action thriller (The International) featuring the same storyline involving the International Bank of Business and Credit.

Neither Clifford nor Altman had experience in banking when their law firm enabled what prosecutors charged was a global criminal operation. The U.S. press called the scheme the biggest bank fraud in history. This $20 billion transnational operation even included a pop culture component. Clifford’s young protégé and law partner, Robert Altman, was married to Lynda Carter, the star ofWonder Woman, a 1970s fantasy-adventure television series.

The real fantasy in this long-running fraud lies in identifying why U.S. lawmakers continue to befriend and defend a “nation” that has for so long—and so consistently—deceived and betrayed its most loyal ally. As a badly miscast Eva Marie Saint asks in her most memorable line in Exodus: “When will it ever end?”

The greatest wonder will be if, based on the well-documented history of this duplicity, those lawmakers urging continued support for these fanatics are not charged with treason.

To restore its national security, the U.S. must shake off its entangled alliance with this extremist enclave. “Shaking off” is the literal translation of “intifada.” Those who comprehend the trans-generational nature of this deception are quickly reaching that conclusion. The others may be waiting for the movie, American Intifada.